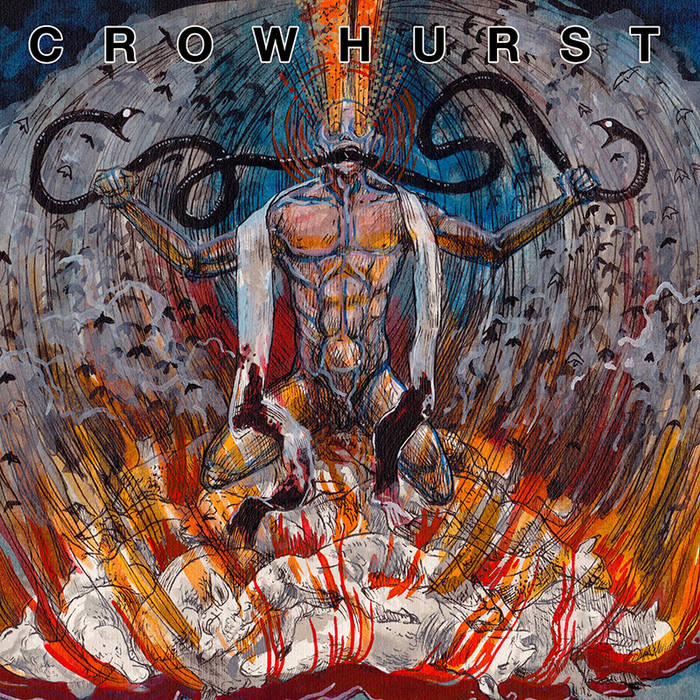 Matthew Toye In comparison to the other Crowhurst stuff this is pretty straight forward. It's an intriguing listen none the less. Fantastic execution as well. Favorite track: It Is The Mercy.

Tolujin Love it. Reminds of the best early 90s Amphetamine Reptile releases, not necessarily in sound but in spirit -- the same restless invention and the same total disregard for genre expectations -- and the same gorgeous ugliness. Favorite track: A Precipice Of Stone.

Josh Escandon Coolest merger of post-black metal and psychedelic doom. One of the best debuts I've heard in a long time. Favorite track: It Is The Mercy.

Travis Niemeyer A positively ingenious marriage of noise/ambient and a solidly-grounded foundation of extreme metal with a penchant for art...with class and precision.

Vinyl released by Ivory Antler.
CD is self released.

"A consistently tense and angular hybrid of black and doom metal... sounds every bit as massive as possible without polishing away the ugliness that makes Crowhurst so unsettlingly addictive."
-Noisey

"With their feet firmly planted among post-industrial roots, Crowhurst is one of the few projects who have survived a full-on expansion while retaining their experimental integrity."
- Heathen Harvest

"Crowhurst is the very portrait of an underground band on the verge of exploding to the forefront of extreme metal."
- CVLT Nation

"With a revolving door of collaborators and an expansive catalog that stretches beyond Gambit's original harsh electronics ... Crowhurst has morphed into a full-fledged metal band, doling out blackened doom that’s cut with post-rock and occasional noise."
- AdHoc

"The sound blends influences of noise, post-black and even psychedelic in a unique way. It’s hard to pick out a track that I enjoyed most on this upcoming self titled release because each one encompasses its own darkness."
- Black Metal Mother

"Certainly hypnotic by how the guitars and bass create a maze of sound in which you lose yourself... Crowhurst seem like a band who have mastered their sound."
- Metal-Rules.com

"If I could sum this album up in one sentence, it would be 'expertly executed experimental black metal'" - Terrorphoria

"A highly impressive collection of songs that show a mastery of a genre..." - WonderboxMetal

"All the dirty sound you might expect from blackened doom is found intact, and the occasional howls beyond human capability only emphasizes the strength of the underlying song-writing."
- Ride With The Devil

"An almost indescribable feeling of fatigue surrounds this album, and conjures up feelings of old Swans in the process. This is an excellent album for those times when you need a break from the blast beats, but still want a reminder that life is a miserable fucking joke."
- Pledge Allegiance To Grindcore

"Lead singer Jay Gambit's vocals can be best described as a chained victim yelping twenty feet below a dark well. His energy and focus is angled upwards as he screams towards the light. Chilling hollow echoes and suppressed cries emanate to provide the listener with a very disturbing but truly original vibe"
Rotation11

"They may explore a range of sounds throughout this thing—at times, you’ll hear elements of everything from post-metal to doom and then some—but each and every one of them simply crushes you, as if their primary objective as a metal outfit was simply the physical and mental destruction of their listeners."
- Horns Up Metal Blog

"Close enough to perfect for me to round this one up to a 9.5."
-Abysmal Hymns